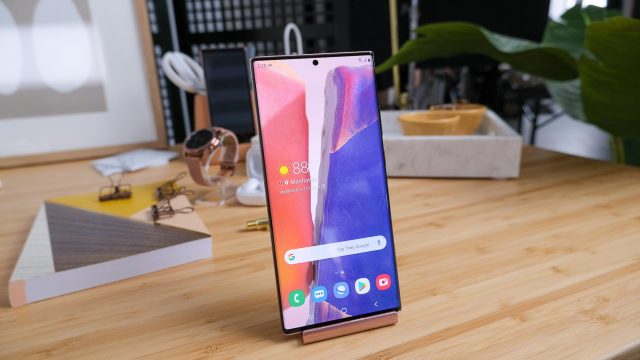 The best big phone you can buy is the Galaxy Note 20 Ultra. And it starts with a huge 6.9-inch screen with a dynamic 120Hz refresh rate, offering super smooth scrolling and gameplay when you want it. However, the Note 20’s panel is also smart enough to dial things down based on what’s being displayed to conserve battery life. The S Pen also gets a bunch of upgrades this time around, from a faster 9ms response time and new air gestures to the ability to sync your scribbles with voice recordings.

Samsung also went big on the cameras with the Galaxy Note 20 Ultra. You get a 108MP main camera for capturing a ton of detail, plus a laser autofocus sensor to virtually eliminate blurring. The 50x Space Zoom is also very impressive, letting you cut in very, very close. The Galaxy Note 20 Ultra has plenty of other talents, too, including the ability to stream Xbox games, running Android apps on your laptop with Link to Windows and a wireless DeX mode that puts Apple’s AirPlay to shame.

The iPhone 11 Pro Max is a familiar-looking phone that happens to pack a lot of improvements under the surface. Chief among them is the camera system. Now upgraded to three lenses, comprising wide, ultra-wide and telephoto optics, the latest range-topping iPhone has the versatility to capture stunning photos in any scenario.

But it’s not just hardware that makes the device perfect for capturing moments. Apple’s breakthroughs in computational photography take center stage on the iPhone 11 series, thanks to improvements to Smart HDR, the all-new Night Mode and Deep Fusion. All of these software enhancements automatically balance lighting and detail based on contextual awareness gleaned through machine learning, so the new iPhones are as intelligent as they are powerful. And with a fantastically bright 6.5-inch Super Retina XDR OLED display at your disposal, you’ll have all the room in the world to view every photo and video you take — in stunning HDR, no less. 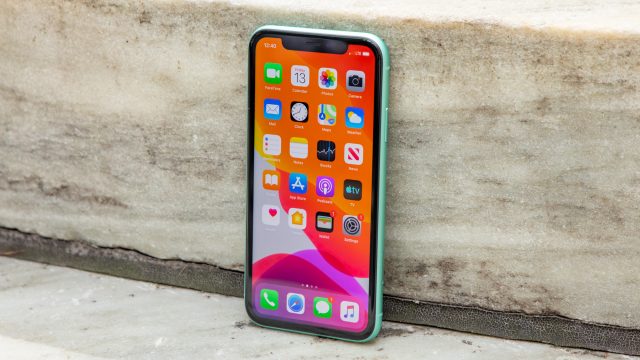 You don’t have to make many tradeoffs for that lower price tag either. The iPhone 11 has the same top-of-the-line A13 Bionic processor found in the pricier Pro models, and though it only has two cameras to the three lenses on back of the iPhone 11 Pro, it offers many of the same photographic capabilities. This is the iPhone to get if you’re overwhelmed by both the iPhone 11 Pro Max’s size and price. 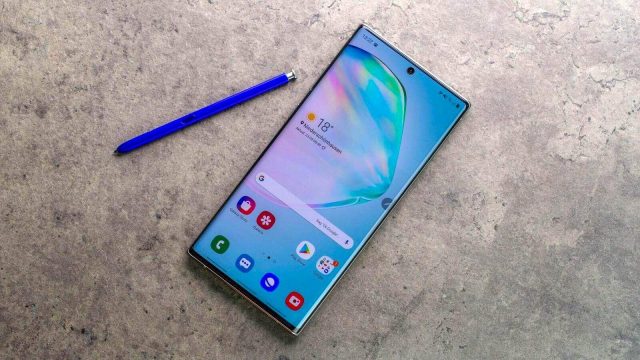 The 6.7-inch Samsung Galaxy Note 20 may not have the astonishing 108MP camera from the $300 more expensive Note 20 Ultra model, nor does it have its 120Hz display or glass-and-metal design. But it is just as capable when it comes to getting things done, thanks to its Snapdragon 865 Plus processor, S Pen and all the enhancements Samsung has made to its Notes app and productivity features.

The Note 20 can cast to a wireless display or your Windows PC via the desktop Your Phone app, and now allows users to append audio recordings to handwritten or types notes. It also supports Xbox cloud gaming via the Xbox Game Pass Ultimate beta, making it well suited for play as well as work.

We do wish the Note 20 came with a beefier battery or perhaps more efficient chipset, as it lasted a fairly average 9 hours and 26 minutes in our custom battery test. That said, there aren’t many serious downsides to going with the cheaper Note 20 versus the pricier Ultra, but you will save a ton of cash in the process. 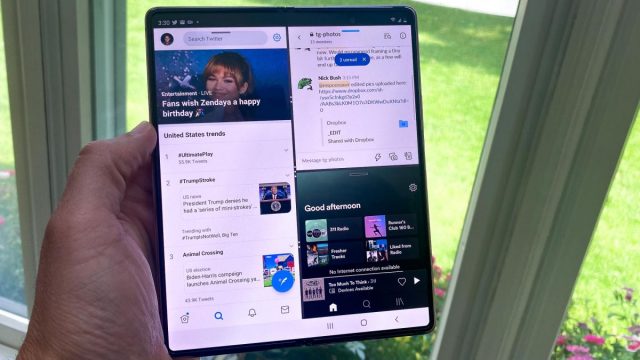 You don’t get a much bigger phone than one with a 7.6-inch display, which is precisely how large the Samsung Galaxy Z Fold 2 unfolds to be. A massive panel like that is ideal for running multiple applications at once, which the Z Fold 2 lets you do with its App Pair feature.

But let’s say you’re on the go, and the time’s not right to be carrying a massive tablet display everywhere. The Z Fold 2 folds down to a 6.2-inch cover display that can support all the same applications and activities as the primary panel. Even better, thanks to Samsung’s clever Continuity software, whatever app you’re using on either display will transition to the other one when you open or close the device.

Thoughtful features like that make the Galaxy Z Fold 2 not only the best foldable phone on the market, but the most versatile big phone — for those willing to shell out $2,000 for the privilege, that is. 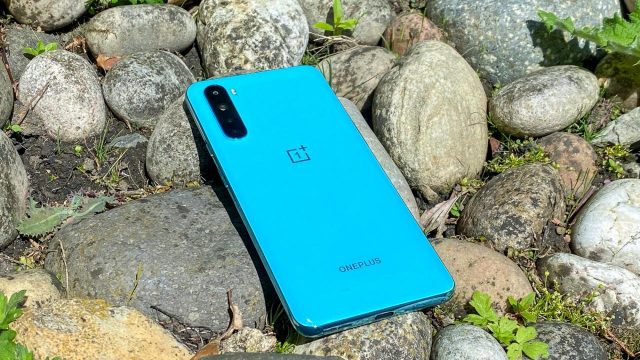 The amazing thing about the OnePlus Nord is that, while it may be at the bottom of the pecking order in terms of OnePlus’ roster of phones, it doesn’t compromise on much. Instead of the Snapdragon 865 processor found in the OnePlus 8 and 8 Pro, the Nord utilizes the lower-spec (but still 5G capable) Snapdragon 765G. And that’s really as far as the cost-saving measures go.

Otherwise, you still get a 6.44-inch 90Hz full-HD OLED display, 30-watt fast wireless charging, a big 4,115-mAh battery, up to 12GB of RAM, a quartet of cameras on the back (including the same primary 48-megapixel lens as the OnePlus 8) and OnePlus’ attractive design, all for £379, which still equates to less than $500.

Ah, but therein lies the rub. The OnePlus Nord isn’t yet available for buyers in North America, and may never be. OnePlus says a Nord phone is coming west of the Atlantic before the end of the year, though we don’t know what that device will look like compared to this one. Until then, interested parties in North America are free to try their hand at importing. If you happen to live somewhere you can own a Nord, however, you should buy one. You won’t regret it. 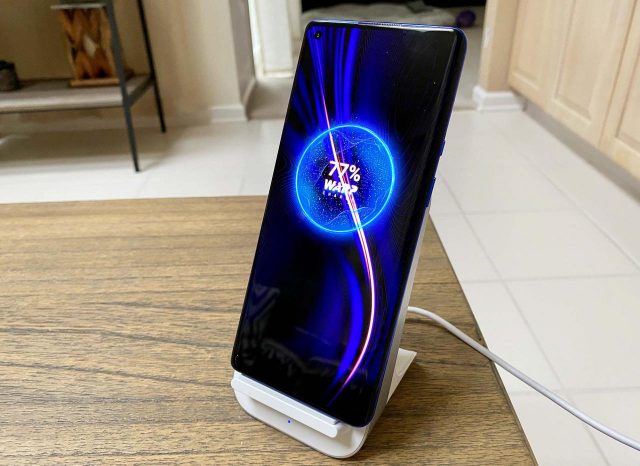 Measuring 6.78 inches from corner to corner, the OnePlus 8 Pro has one of the largest displays on any smartphone you can buy today. It’s also one of the prettiest AMOLED screens on any modern handset, with a quad-HD+ resolution and a peak refresh rate of 120 Hz.

While the OnePlus 8 Pro isn’t far from the first phone with a 120 Hz panel, it does one up the displays in Samsung’s latest Galaxy S20 series of handsets, because OnePlus’ device allows you to use the phone at its maximum resolution and refresh rate simultaneously. This is something avid gamers and streaming enthusiasts will appreciate, along with the panel’s boosted 240 Hz touch sampling rate, which makes the screen as responsive as it is smooth.

There’s a lot to like about the OnePlus 8 Pro aside from its screen, too — like its speedy Snapdragon 865 power and gobs of superfast LPDDR5 RAM, respectable quad-lens camera module and lightning-quick wireless charging, which can get the battery to 50% in just a half hour. At $899, it’s one of the most expensive handsets the company has ever released, though it slides in at several hundred less than the similarly-sized and specced Galaxy S20 Plus, making it a compelling alternative to Samsung’s flagships and one of the best big phones there is. 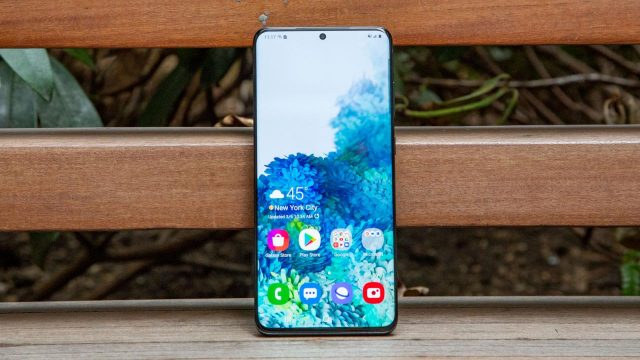 Samsung’s Galaxy S20 Plus used to finish higher on this list of the best big phones. But then the regular Galaxy Note 20 came out for $200 less, while offering a slew of useful tools focused around productivity, and so the S20 Plus doesn’t seem quite as great a deal as it perhaps once did.

Nevertheless, this Galaxy offers the best mix of specs and features of any of Samsung’s Galaxy S20 models. If the 6.4-inch Galaxy S20 is lacking in some respects, and the 6.9-inch Galaxy S20 Ultra is simply too expensive for a modest camera upgrade, then the Plus variant is just right.

For $1,199, the S20 Plus offers a striking display with a 120Hz refresh rate (something the smaller Note 20 lacks), 5G connectivity, Qualcomm’s Snapdragon 865 processor, and solid battery life. S20 Plus buyers do miss out on the S20 Ultra and Note 20 Ultra’s 108MP camera and 10x lossless hybrid zoom, but we think most people would be willing to accept those sacrifices for a discount compared to those models. 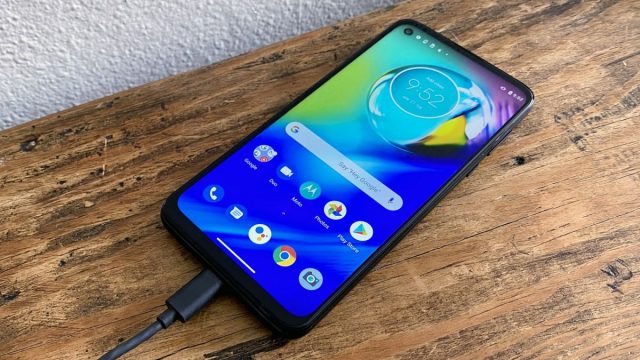 Big screens tend to drain batteries faster than their more compact counterparts, but that’s not a concern with the Moto G Power. Equipped with a 5,000 mAh battery, the Moto G Power was the longest-lasting phone we’ve tested in some time, holding out for 16 hours and 10 minutes on our battery test. That places the Moto G Power at the head of our list for best phone battery life.

But there’s more to the Moto G Power than just a big battery. You get a sizable 6.4-inch screen to work with, though we wish the G Power produced more vibrant colors. The processor and cameras aren’t high-end, but they do produce performance and pictures that measure up well against other phones in the Moto G Power’s price range. And speaking of price, that’s probably the best thing the Moto G Power has going for it — at $249, this phone is one of the most affordable phablets around. 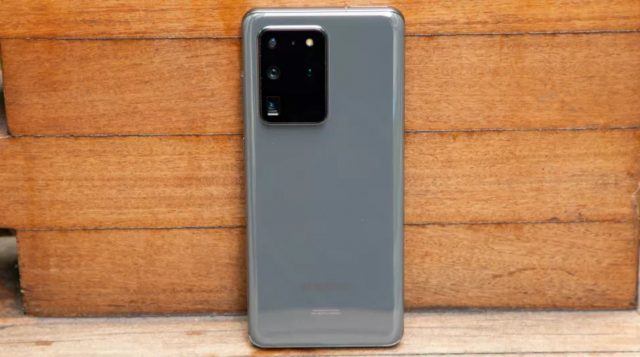 Absolutely everything about the Galaxy S20 Ultra is big, from that 120 Hz display to its 5,000-mAh battery, sub-6GHz and millimeter-wave 5G connectivity and 7.7 ounces of heft. And then there’s the quad-lens camera system, which combines a 108-megapixel main sensor with a 4x telescopic optical zoom telephoto, 12-MP ultrawide shooter and a time-of-flight sensor specially designed to deliver improved depth effects.

Truth be told, the S20 Ultra doesn’t always produce the finest photography, and the Note 20 Ultra bests it in many respects. Nevertheless, the versatility of that Space Zoom shooter and the insane level of detail that a 108MP sensor can provide make it arguably a more useful shooting partner than the triple-camera stack in the latest flagship iPhones.

The Galaxy S20 Ultra starts at a very pricey $1,399 — and that assumes you’re satisfied with the 12GB of RAM and 128GB of storage in the base model. Still, the S20 Ultra is a testament to just how much utility companies like Samsung can pack into a handset when they put their minds to it.